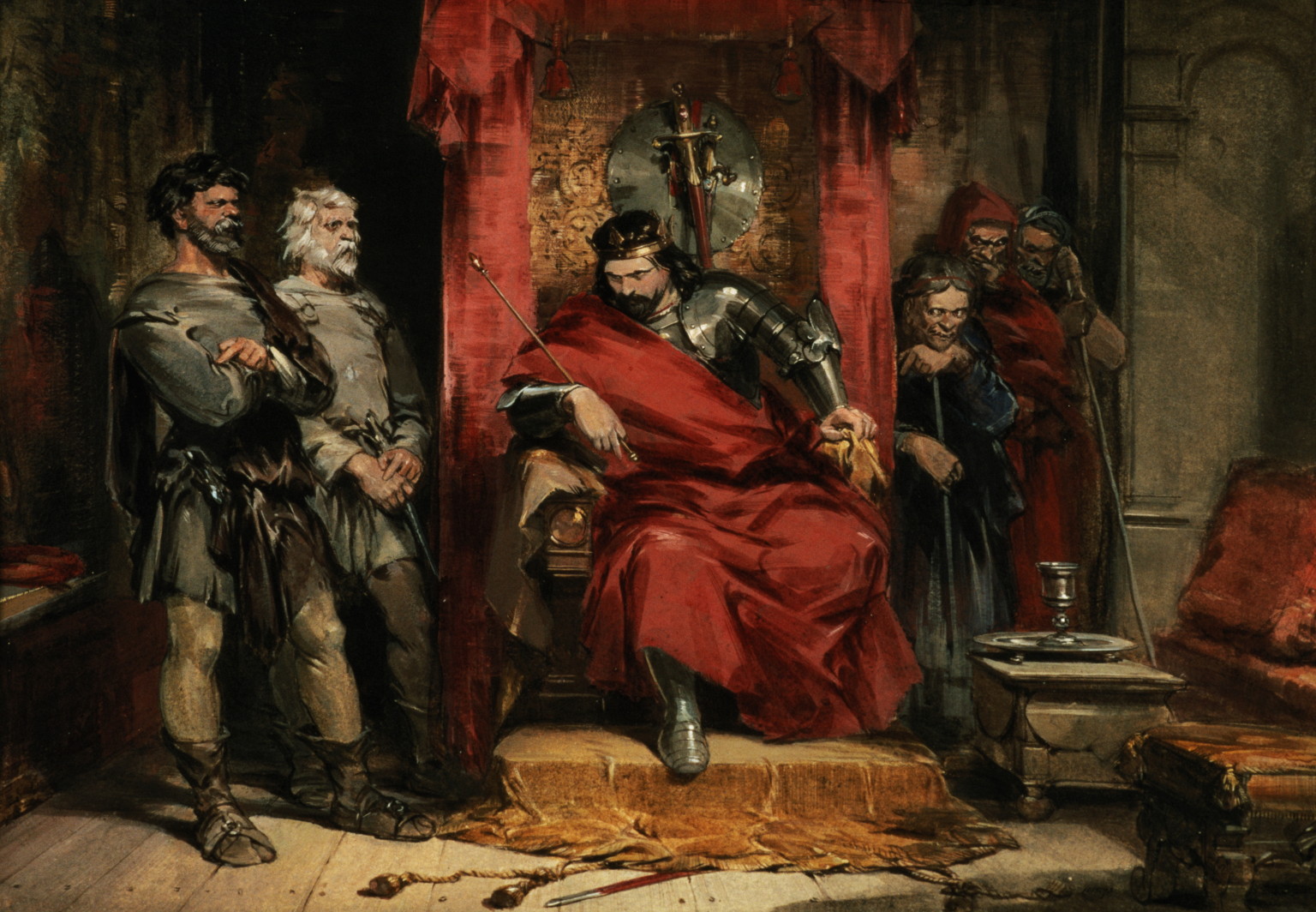 Establishing shot outside of Duncan’s chambers:

A thick palpable moisture clings to the cold, chilling air. Wet condensation coats the stone walls and water collects in puddles along the cobblestone paths inside the castle. A pale moon struggles to illuminate a starless night, black as ink. All is quiet. Three crows appear and perch on a nearby railing. The flagpole above flows in the wind bearing a honor banner representing nobility, Duncan, and the nation of Scotland.

It is silent. In the back room lies Duncan on a beautiful bed of woven red sheets and a dark red cherry wooden bedpost. Across the room lies an open window, with two curtains on each side blowing in the wind. It is cold. Enter MACBETH. Macbeth traverses the room with silent prowess. He unsheathes his dagger from his leather scabbard, it gleams in the moonlight let in through the open window. As Macbeth approaches Duncan, eyes gleaming with his face fully illuminated, the King remains still and asleep. Macbeth can see his own hot breath in the air. Duncan lies with his arms raised, wide and high to his sides and his feet extended on the bed next to each other, his head in a sunken position, on his back. Macbeth approaches Duncan’s bed on the left side and raises his dagger just above Duncan’s chest. The camera switches it’s view to just outside of the open window looking into the room at the wall. The shadows of Duncan in his bed and Macbeth over him is reflected on the wall. He hesitates for three seconds and the dagger remains suspended in the air. Macbeth then drives his dagger down into Duncan’s sternum, and then removes his weapon and steps back. Camera switches back to inside the room to a floor shot, where the camera is on the ground and you can only see Macbeth’s feet and the bed’s legs on the floor. He stumbles backward clumsily, taken aback, and stops, standing still. His bloody dagger slips through his fingers and hits the cold stone floor with a clang. Short pause. Macbeth drops to his knees on the floor beside the dagger. The camera view can see only the legs of the bed, Macbeth’s knees, and the bloody dagger. Blood drips down the sides of the bed in the background and blends with the red woven sheets and cherry wood bed-post. Steam rises from the fresh blood.

After Macbeth exits Duncan’s chambers(camera shot outside of Duncan’s chambers): Macbeth steps out onto the path, forgetting to close the wooden and iron bolt door behind him, bloody dagger in hand. The black crows take flight and disappear into the night. The flagpole sits, now, flagless; the banner has been torn off by the harsh wind. The cool humidity has given way to a hazy fog that settles on the castle (representing the clouded minds, distorted facts, and treachery regarding Duncan’s murder) Macbeth stumbles up the stone path slowly, his pale face half illuminated in moonlight, half hidden in dark shade. Camera view changes to a long shot overlooking the castle with a slow zoom out, eventually centering on the lonesome moon in the sky, lighting a starless night.

Enter Macbeth over the threshold into Duncan’s chambers.

A crow croaks an eery caw.

MACBETH (to himself): Tampered drink hath served me doubly in my done deed,

As the grooms hath fulfilled His fearful fate in their thirsting greed,

Go now, be my master no more, on thy throne I shall sit,

But shapeless as fog wind-carried,

And quiet as silence to sound as darkness to sight I must be,

Stop I must the bloodline growth of this golden round’s royal tree.

Macbeth approaches Duncan and kills him

Thy crown’s men and thy crown himself, like a newborn babe, tasted a sweet sleep,

Now sweet is bitter by I, Glamis, for the resting servants, and worse for the leader,

Thou hast not a bitter taste, thou hast no tongue,

For thy tongues cut, by me, the harbinger of a deeper sleep,

And for Him, a sweet rest, nor a bitter sleep, he will have.

MACBETH (to himself): My eyes now do their own abuse!

For my reflection betrays the most fatal betrayer,

The most gluttonous thief of life,

Life so royal, so honest, so pure

Upon my speeding of his surcease.